China’s biennial major woodworking machinery show took place in Beijing in early March with most exhibitors happy with the response, particularly in view of some negative vibes coming from signs of cooling in the national economy

The WMF exhibition took place for the first time in the New China International Exhibition Centre, close to Beijing's Capital Airport. The halls are big and access from the airport is very convenient. However, the price to pay for that convenience is a difficult commute for those travelling from the city centre.

This meant there were mixed views as to whether this venue was an improvement overall on the Beijing city centre-based CIEC exhibition centre previously used, or not.

Organisers Adsale Exhibition Services Ltd reported that "the four-day exhibition attracted 28,620 visitors from 75 countries and regions, of which 10.2% were overseas buyers".

Growing competition to the European-owned dominance of the continuous press market was evident once again at the show.

Yalian is one competitor, having taken orders for 16 of its continuous press lines. The first of six lines already running started up in June 2008. Three of the 16 are 8ft-wide lines, with one 6ft. The rest are 4ft wide.

Principal shareholder Mr Guo Xiqiang started out as a particleboard manufacturer, then made MDF, and then developed his own Mende-type line, of which he sold 23. Two are bagasse lines - one in India and one in Egypt. The company still offers these lines and has live enquiries from India, Iran, Ukraine and Bangladesh, said project manager Colin Zheng.

Yalian can supply forming, pre-press, continuous press, cooling and intermediate storage and can offer other components as sub-contracts.

Chinese state-owned China Foma Group Co Ltd is another such competitor, having built an eight-feet wide continuous press of which it has so far sold one unit. This is undergoing modifications and project manager Shiding Xu said it is generating other interest. A nine-feet wide press is also under development, he said.

Within the group is Sufoma, known for its sanding, forming and discontinuous press lines. Another division, Zhenjiang Zhongfoma Machinery, offers refiners, chippers, flakers and mills. The group has supplied around 500 multi-opening press lines and 200 refiners.

"We expect the market to increase in 2013 as a lot of customers want to replace their old multi-opening lines with continuous ones," said Mr Shiding. He also believed there would be more particleboard than MDF lines built.

Shanghai based SWPM (part of the German Dieffenbacher group) has of course supplied its own 4ft continuous press for some years and has long been established as a major supplier of multi-opening press lines and a wide range of other equipment.

Sales manager Li Jie confirmed that enquiries and orders for continuous presses outnumber those for multi-opening ones now, although the company still exports the latter to developing countries, as complete lines.

Mr Li confirmed that the Chinese economy is slowing down but expected an improvement in the second half of this year, with particleboard being the preferred option.

Although it does not make a continuous press, Jiangsu Baolong Electromechanical Manufacturing Co Ltd does offer a wide range of machinery to the panel industry, including feeding/conveying, debarking, chipping, chip screening and drying.

Yumulai Group was established in Shanghai in 2005 as a mechanical and electrical engineering company. It has a workshop in Changzhou where it offers project management, the development and construction of machinery, automation and other technical products/support to the panel industry, in which it says it has many references. The firm, founded by two engineers, is currently engaged in developing commercial production of bamboo OSB in China.

Hansjörg Prettner of Swiss wide-belt sander maker Steinemann is based in the company's Kuala Lumpur office and at the time of the show was seeking, with some difficulty, a suitable engineer to join his team.

The company also has an office in Shanghai, where it manufactures 4ft-wide sanding lines, machines for printing and it has conversion lines for abrasive belts.

"There are less new lines being built so we are concentrating on service and consumables," said Yang Jun, sales director in Shanghai. "Investment is slowing, especially since the last quarter of 2011, but this industry was always cyclical," he said. "But I believe the market will pick up again in two or three years, with investment in new lines, because it is harder and harder to make a profit out of the older lines."

Sandvik is celebrating its 150th anniversary this year. Jörg Kaufmann and Jan Ola Jonsson represented the company on the WMF stand and said the market in China is still good for them as the market leader in endless steel belts for continuous presses.

"It is a bit quieter at the moment, but we are expecting some orders after the show," said Mr Kaufmann.

Sandvik has operations in Shanghai, Guangzhou and Beijing for belt service and repair just for the panel industry.

"We have service technicians permanently based in Dalian and expect many years of good business in China for our quality control and on-the-line spark detection/extinguishing systems."

Mr Kleinschmidt said he had received overseas visitors from South East Asia and Russia at the show.

Dieffenbacher and its subsidiary SWPM held a seminar during the show.

"We emphasised cost-saving, new press features and new products," said Volker Kitzelmann, cfo of Dieffenbacher group. "The EvoJet system is very interesting to our high-end customers and we are close to signing some orders."

Mr Kitzelmann confirmed that several projects were under discussion, mainly for particleboard lines. "The past two years have been very very good for us in China. We are not expecting the same for 2012 but China will continue to be one of our most important markets."

Concerning Chinese-made continuous presses, other than SWPM, he admitted they are an increasing threat but said Dieffenbacher would stay one or two steps ahead of them.

Siempelkamp had a display of the exit roller assembly of a 4ft continuous press on its stand at the fair.

This company also held a symposium, with 140 guests attending, with the main topic again being 'cutting your costs'.

"The EcoResinator for MDF can save up to 25% on glue consumption and we have taken the 4ft-wide ContiRoll press up to 47m to make larger quantities and so reduce unit costs," said Ralf Griesche of Siempelkamp. "Between November 2007 and February 2011, we sold 14 lines of 4ft width to China."

The company also promoted the Ecocalibrator principle to make pressing more even by reducing platen deformation between the press frames.

"There is a big interest in China now for thicker boards with a capacity of 200,000m3/year, on our 'Dragon Press'," said managing director Heinz Classen. "These longer presses give a better sanding tolerance on thicker board," he added. "We have good testimonials from our customers and we are expanding our sales force in China."

Ulf Eriksson of MDF refiner maker Metso said: "We had our best year ever in 2011, selling 13 Evo Defibrator systems worldwide, seven of which were in China".

Raute (Shanghai) Machinery Co Ltd has just built an LVL line in Taizhou for Dalian Kemian, with a capacity of 60,000m3/year.

"We are now making our Twin Peel line in Shanghai and exported the first one to Sarawak, with another two under construction, also for Malaysia" said JP Salimaki, vice president sales and technology.

GreCon had a lot of projects in China in 2011, according to managing director Uwe Kahmann. "We saw a very big increase in our sales as people become more quality conscious."

GreCon supplies its measuring technology such as thickness gauges, moisture meters and its bond analyser and is also seeing increasing interest in spark detection.

"It's not just new lines, though, there is plenty of scope for upgrading older continuous lines," Mr Kahmann added.

Contibelt Band Systeme (Austria) started selling its stainless steel belts in China in 2009. "So far it is 4ft-wide only, but from the end of 2012, we will supply belts three to four metres wide as well," said sales manager Sam Li.

German machinery maker Pallmann has sold 40 refiners to China and sold 56 chippers in 2011, said sales manager Frans-Josef Wilbois. The company has sales offices in Beijing and Shanghai and service in Beijing. He said it is also setting up a parts store in Shanghai to open during this year.

The company is reinforcing its sales efforts in China as the major oem companies now want to supply complete lines from their own resources (this was before the share purchase in Pallmann by Siempelkamp).

Imal-Pal of Italy reported that it had a good show and confirmed that new projects are mainly for particleboard these days.

"But we are offering several machines to cut costs for MDF mills and we guarantee to cut resin consumption and improve the quality of particleboard," said sales director Stephano Benedetti.

One recent particleboard project for the company was for Huazhou Particleboard, where it supplied blenders, glue kitchen, screens and air sifters for classification and cleaning.

At a symposium during the WMF fair, Imal and Pal presented the Dynascreen, air grader, oscillating screens and technology to improve particleboard quality by the selection of particles.

"Another focus was on utilising recycled wood and we had interesting feedback," said Mr Benedetti. "We also presented Dynasteam to inject steam into the mat before the continuous press, as well as Imal's new high-pressure blowline resination system."

Austrian stainless steel endless belt maker Berndorf Band held a seminar at the end of the show to discuss three areas: The world in relation to China re panels with trends in various economies, etc; preventative maintenance for the steel belt; and belt repair methods.

Berndorf has a company in Beijing producing small belts for other industries and belt service and installation for the panel industry, but all 4ft- and 8ft-wide belts are made in Austria.

Swiss company Sia Abrasives has been on the China market for over 20 years and has a conversion facility in Guangzhou for belts from 10mm to 3m wide, using raw material only from Switzerland.

Firefly gave very impressive demonstrations of its spark detection/ extinguishing equipment and promised a new product for 2013 with its control system based on smart phone technology.

German saw maker Holzma's Norbert Diener says it has around 30 of its angular saw plants already operating in panel mills around China, with others under construction and under quotation.

Modul Systeme, now half-owned by Andritz, found the show very interesting, according to Wolfgang Garner, who said he had met a lot of visitors from India and Pakistan, as well as seeing a big interest from Chinese visitors in secondhand European equipment, mainly for particleboard.

Anthon of Germany had a very busy exhibition, with its booth constantly besieged by visitors. The company has a large number of its angular saw plants operating in Chinese panel factories.

At no time could the 2012 WMF have been said to be busy or the aisles packed with eager visitors.

However most, if not all, exhibitors were happy with the show and felt that they had made valuable contacts with existing and potential new customers.

Did the venue put visitors off by being difficult to access from the city centre? Or did it gain visitors from the fact it was easily accessible from the airport? Did the seemingly low number of visitors reflect the cooling economic climate in China?

Perhaps all these factors came into play. Certainly the overall impression in China is that the really good times have to some extent been put on hold as the economy is reigned in a little.

Certainly nobody I spoke to is about to give up on this market! 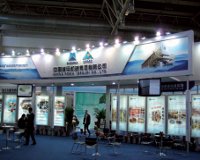 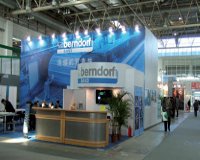 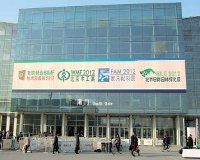 The New China International Exhibition Centre, too far from the city according to some 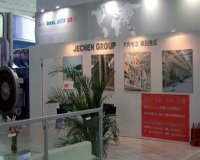