One of the biggest stories to come out of North America recently is the start-up of Kronospan Particleboard’s brand new line in Oxford, Alabama. This large new production line has added significantly to US production capacity. Mike Botting reports

Located in Eastaboga, Oxford County, Alabama in the US, the new Siempelkamp production line turned out its first board on October 9, 2019.

Originally, the expansion of Kronospan’s existing factory, which produces fibreboard and value-added products, was slated for an investment of US$362m, but this was increased to US$463m in mid-June 2016 when Oxford City Council approved an amendment to a tax abatement that was originally granted for Kronospan's US$362m expansion. Those original plans promised to add 160 new jobs.

Kronospan company officials requested the amendment because the investment had been increased by US$101m and was forecast to bring 150 more jobs than outlined in the original plan.

Tim Pack, chief financial officer for Kronospan, interviewed by local news source eastalabamaworks.com, said that since the company began operations in Alabama in 2008, its total investment has been approximately US$800m.

He explained that Kronospan’s Oxford facility is the most vertically-integrated laminate flooring manufacturer in North America, performing all necessary processes at the Oxford site, adding that Kronospan prides itself on a start-to-finish product.

He added that, since 2008, in spite of very difficult market conditions in the housing industry, the company has maintained its level of employment at the Oxford facility since start-up.

On completion of the expansion project, Kronospan’s site represented the largest private capital investment in the City of Oxford and Calhoun County and is now one of the largest employers in the area.

With a rated capacity of 550,000m3 per year, the new particleboard line could add around 10.5% to previously-existing US capacity of around 6,410,000m3 when running at full speed.

The Eastaboga factory site is also home to a 329,000m3 per year MDF production line.

However, the new line is not just a story of raw particleboard production: It is also the story of one producer – and the only one in North America – to produce, on one site: MDF/HDF; MUF and UF resins; impregnated paper; laminated HDF; thermally-fused and melamine laminated particleboard; laminate flooring; and, of course, raw particleboard.

The project included the enlargement of the existing KronoChem resin plant to cope with these increased production capacities.

Kronospan says that building this worldclass new line demonstrates its desire to establish itself as a leading provider of composite panel products in North America and to this end it invested that US$463m to include all the above – and the creation of a furniture cluster by offering all the required raw materials from one source.

The main supplier for the line was Siempelkamp of Krefeld, Germany, which says this project represents its fourth contract in the US.

The complete production line manufacturer supplied and installed a ContiRoll continuous press of 10ft wide by 43.7m long, as well as the forming line. Siempelkamp said that it provided the most innovative combination of mat forming technology, as well as the cooling and stacking line for master boards from the press outfeed.

Also included in Siempelkamp’s scope of supply for this contract were two short-cycle presses for the lamination of raw MDF/HDF and particleboard panels.

The contract also included the extension of an automatic paper pallet warehouse as part of the expansion of the coating plant.

Kronospan Particleboard’s new production line is located on an existing 460-acre site between Atlanta, Georgia and Birmingham, Alabama and is conveniently located near a major Interstate highway, the I-20, which, Kronospan points out, makes transportation from the site convenient for both long- and short-haul trucking.

The site is also located close to an abundant wood basket, which allows the company to draw wood fibre from forests, sawmills and other wood product manufacturers within a 90-mile radius of the factory.

Kronospan says it has well over 100 years’ experience in the wood products industry and that its latest project in the US will exceed standards for the efficient – and environmentally-sensitive – use of the locally-available timber resource.

The particleboard line was also constructed with the technology to constantly monitor, and efficiently utilise, water and energy resources. This, of course, is an increasingly important part of the planning of any major industrial project in these environmentally-conscious days.

Kronospan Particleboard says that its new plant will create 120 jobs through direct employment of local residents, with a total of 340 full-time positions in the state of Alabama. This doesn’t include the 400-plus jobs associated with the construction of the plant.

The panel maker also says it is partnering with a number of local and state organisations including: East Alabama Works; Alabama Industrial Development & Training Agency; Gadsden State Community College; Calhoun County Career Academy – as well as high schools in the area of the new factory – in order to identify and train local residents for careers within the company.

Kronospan adds that, in addition to the direct and indirect employment impact to the local and state economy, an estimated US$42m of Kronospan Particleboard’s direct costs will be spent in the state, on an annual basis.

Overall, the plant will have an annual impact on the Alabama State’s economy of US$78m, claims the panel manufacturer.

At the time of the announcement of this substantial investment, in 2016, (at that time US$362m), Calhoun’s county governor said: “I’m honoured and pleased to see Kronospan embark on an expansion in Oxford that will create good jobs for the citizens of Calhoun County. Job creation is my number one priority, because it means new opportunities for Alabama residents.”

Responding to these remarks, Tim Pack, Kronospan’s CFO, said: “We sincerely appreciate the State of Alabama, acting through the Department of Commerce, the City of Oxford and Calhoun County, for supporting our expansion project and making it a reality.” 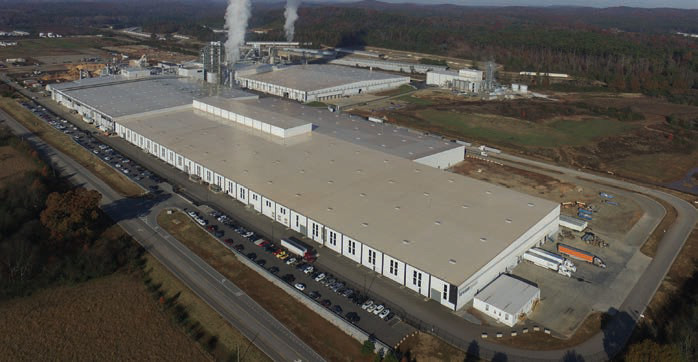 The expansion at Eastaboga has created hundreds of new jobs Source: Kronospan 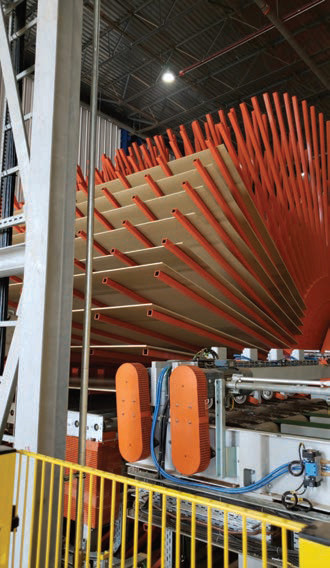