A new player with plans

One of the most recently inaugurated thin MDF lines in the country is that of Hunan Senhua in Yiyang City. As a completely new entrant to the panel manufacturing industry, this company had a steep learning curve to follow

Yiyang Senhua Forestry Development Co Ltd was founded in 2003 in the business of forestry rather than that of wood products.

It was in 2010 that Yiyang Senhua decided to go into wood products for the first time and in March of that year it signed a contract with Dieffenbacher of Germany for a continuous press MDF production line.

In September 2010, the company set up a new subsidiary called Hunan Senhua Wood Industry Co Ltd to be responsible for the company's first panel making venture.

Obviously, when you have no inhouse experience of manufacturing a product, the first thing you need to do is to employ some people who know what they are doing.

General manager and senior engineer Mr Liu Zhigang has considerable experience of continuous press lines, gained while working for MDF and particleboard maker Yingang, although that experience is on Siempelkamp ContiRoll lines rather than on Dieffenbacher CPS ones.

Vice general manager and senior engineer Mr Ling Dasheng has experience as project manager for setting up the Dieffenbacher CPS line at MDF maker Baoshan and subsequently running that line. In fact, this is his third CPS line.

"This is the first wood based panel line for Senhua and the first continuous line in Hunan province, but we do have a lot of forest and were selling wood to other wood based panel manufacturers, so we decided to do it for ourselves," said Mr Ling. "Before he made the decision to buy the line, the owner, Mr He Yuncai, researched the panel market in China and decided that the MDF market was still very big."

Having reviewed the machinery available, the decision was made to go with Dieffenbacher and Mr Ling and Mr Liu were approached about joining Senhua.

A 180mu (12ha) site was then purchased with a licence from the government of Hunan province.

"The government controls all land, forests and the environment and it is not easy to get a licence from them," said Mr Ling.

Construction on site started in August 2010 and the first board was produced on 26th September 2011, with full production following on 18th December 2011.

That is not the end of the story. Senhua plans to buy another 100mu of land adjacent to its new factory for a woodyard and to build a laminate flooring factory.

"We plan to produce 10 million m2 per year and we are already in discussions with Holzma about the machinery for the line and hope to sign the contract by the end of 2012," said Mr Ling.

The wood which the MDF line uses is poplar from the parent company's own resources and the design capacity of the line is 220,000m3 a year. Senhua is making MDF, HDF and thin HDF (THDF).

The Dieffenbacher scope of supply included everything except the chipping, refiner, energy plant, sanding and cut-to-size.

The CPS continuous press is 8ft wide and 28m long.

Board stacking/storage at the end of the line employs a fully-automatic robotized Lukki panel handling system from Dieffenbacher Panelboard Oy in Finland.

Chipping was supplied by Metso of Sweden, as was the 54in Evo refiner. The sander is an eight-head machine from Steinemann of Switzerland.

Cut-to-size system is from Anthon of Germany.

Debarking was supplied by a domestic machinery maker and a drum chipper from a Chinese supplier chips slabs, produced when squaring logs for skids, for use as fuel in the GTS Shanghai energy plant.

A Weko mat spray damps the mat surfaces before pressing.

This line gives the impression of one built to European, rather than Chinese, standards, with its on-the-line quality control, automatic panel handling and other 'sophisticated' facilities.

Currently the markets for Senhua's production are in flooring, doors, furniture and high-end packaging.

"In the near future, we want to break into the printed circuit base board market, too," said Mr Ling.

"There are six or eight multi-opening MDF lines in Hunan, but without another continuous line here, the market is not bad for us," he added.

With the Chinese economy predicted to cool this year and a lot of competition in the MDF market in general, how does Mr Ling see sales developing?

"The last two years and up to now, the Chinese property market has been very strictly controlled by the government but I think it will improve from the end of this year and then the MDF market will also improve," he said confidently. "Right now, it is very critical for us but in my opinion it will begin to improve before the end of this year.

"Our advantage is that we have our own forest, which is not controlled at all by the government so we have a good raw material supply and it is all plantation-grown under our own control and this helps against the strong competition in the MDF market."

Having said that, there is one thing that no company can control and that is the weather.

At the time of my visit to Senhua's brave new mill, weeks of continuous rain had brought logging to a complete standstill as it was impossible to move the logs off the plantations.

That meant that the line was not running and would not be running again until the empty log yard could be replenished. 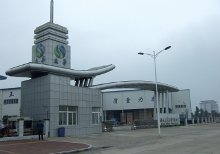 Entrance to the Hunan Senhua factory in Yiyang City 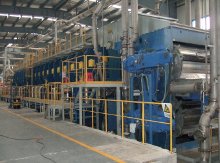 The Dieffenbacher CPS press is 8ft wide and 28m long 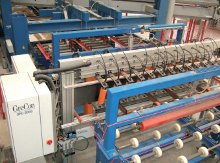 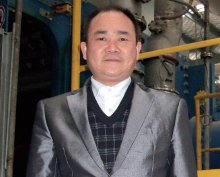 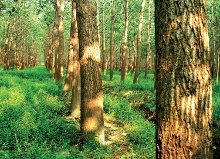 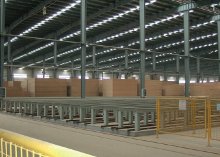 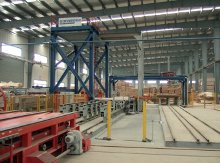 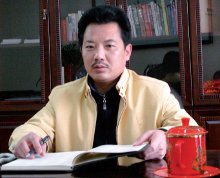